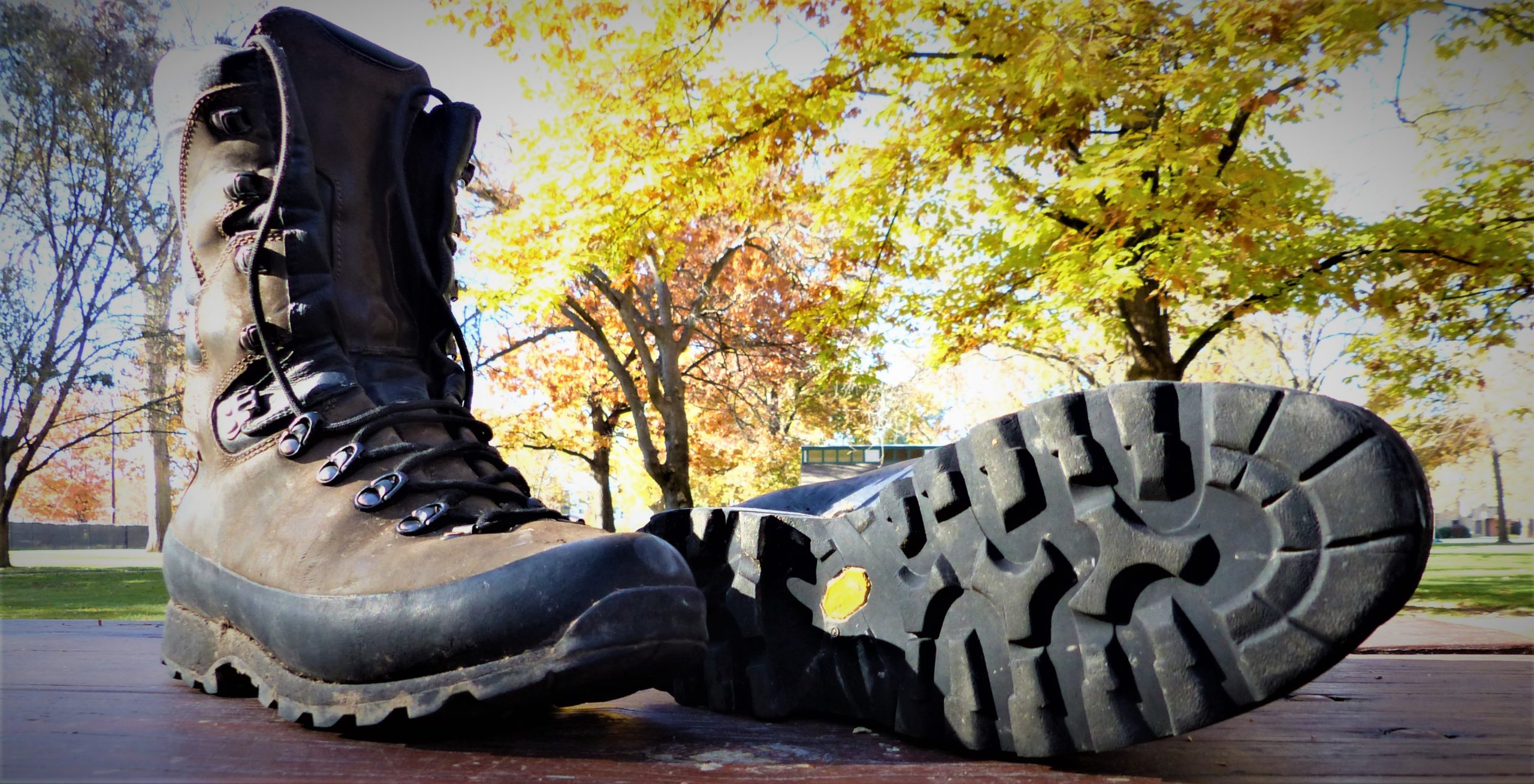 This year I was treated with the opportunity to test out some Hoffman Explorer Boots throughout my scouting and hunting season. While I know boots are one of those things that you just have to try to know if they are going to work for you, I can personally speak to how these Hoffman Explorer Boots did for me while testing them out over the last year. Even though I can’t tell you if these boots will be comfortable for you, I CAN lay out how they performed for me as well as their build quality, durability, break-in period etc.

Make sure to check out our other gear reviews and the Backwoods Pursuit YouTube Channel to help you decide what gear will help you stay out in the field longer!

Hoffman Explorer Boots come in a number of heights (6 inch, 8 inch, and 10 inch) and are available in both insulated and non-insulated versions. Since I do a lot of early season archery hunting, I chose to test out the 8 inch, non-insulated model. Here are the specs for the Hoffman Explorer Non-Insulated Boots:

These boots are flat out top notch quality. From the stitching, top quality leather, waterproof liner to the Vibram outsole, The Hoffman Explorer Boots scream quality. Lets dive in to details of these boot.

Hoffman Explorer Boots: Comfortable out of the box

While the Hoffman Explorer Boots didn’t require any time to break in, I did need to put some boot dressing on them after a couple of uses, as they started to squeak a little when flexing. This isn’t abnormal at all in my experience, especially given that my first trip out with the Hoffman Explorer Boots was in the pouring rain. When the leather gets wet and then dries, it can cause a slight squeaking noise when the boot flexes, but with a quick application of some Kenetrek Boot Wax that I had lying around, it fixed the problem and never came back.

The Hoffman Explorer Boots are a stiff boot that gives you great ankle support and a really stable platform. I’ll have to admit that I’ve been a fan of lighter weight and more flexible style boots for while, so these took a little getting used to. They are much stiffer than the boots I had been using (the Solomon Quest 4D GTX). While I love those Solomon Quest boots (especially for early season hunts), I had some durability and waterproof issues with them, which is something I’d just been dealing with.

The eyelets on the Hoffman Explorer Boots start at the toe with your standard d-ring, then move to an enclosed eyelet for the next four, and then moves to an open hook design from the ankle up to the top of the boot. The hook located at the ankle is recessed farther back, closer to the ankle to keep your foot locked into place. This isn’t uncommon in high quality hunting boots as it’s a proven design to keep your foot in place, and it did exactly that for me.

The Explorer Boots also features a Nubuk leather upper for comfort and a full rubber rand for additional durability. Both of these features do exactly what they are designed to do. The Nubuk upper is super soft and keeps any potential hot spots at bay at the top of the boot, while the rubber rand proved durable. I’ve used other boots where the rubber rand started pealing after a years use, but there was absolutely no sign of that happening after wearing the Hoffman Explorer Boots for a full year.

Another feature unique to these Hoffman Boots is that the Nubuk leather is featured all the way down on the tongue as well. This seemed to increase comfort without sacrificing durability (at least not in this first year of testing). Other boots I’ve used have either a Cordura or full grain leather tongue, so these have a little different design here.

Hoffman Boots are equipped with Sympatex waterproof liners to help keep your feet dry, while still allowing your feet to breath. I can attest to these liners’ effectiveness after testing, as well as their ability to breath. I wore these boots on a 15+ mile day of hiking through some nasty terrain in the 95 degree heat while scouting and my feet stayed comfortable. Granted, you can’t expect any waterproof liner to breath as well as an unlined boot, but I’d say they performed extremely well, even in the super hot temperatures.

I also did a bit of hunting in some really wet weather with these Hoffman Explorer Boots. On one trip the boots stayed wet for several days straight, but my feet inside stayed bone dry. I can unequivocally say that these Hoffman Explorer Boots, while not light weight or flexible like the Solomon Quest Boots, are MUCH more durable and MUCH more waterproof. It’s not even close.

I seemed to tear up a pair of the Solomon Boots just about every year, while these Hoffman Explorer Boots look like they’ve barely been used after a full season of scouting and hunting from June through November. I’ll keep testing out these boots over the coming years, but after one year, I’m impressed.

There was a lot to love about these boots. It’s not every day you get to test out a pair of boots for a year, but I really feel like that was the best way to put together this Hoffman Explorer Boots review. They were comfortable out of the box and took almost no time for me to break in. They proved to be absolutely waterproof in every condition thrown at them, extremely durable, and really comfortable even after wearing them on multiple 6-day hunts that I did during early archery elk season as well as late season mule deer.

There really wasn’t a lot to dislike about these Hoffman Explorer Boots. They performed nearly perfectly and are some of the highest quality boots I’ve used. The only real issue I had with them is that they didn’t seem to give me quite as good of traction in the snow as my brother’s Kenetrek Mountain Extreme Boots did. Granted, the out-sole of the Hoffman Explorer uninstalled isn’t really designed with snow traction in mind like the insulated version of this boot is. That being said, I did find myself wishing for a little better traction in the snow. The tread seemed to be a bit too shallow for snow, lending itself to me slipping more often than I’d like.

My brother’s similarly uninsulated Kenetrek Mountain Extreme boots seemed to provide better traction in the snow as they have a deeper tread pattern than the Hoffman Explorer Boots. Over the course of hunting together in the snow for 5 straight days, I definitely noticed that I slipped more than he did.

These Hoffman Boots were also on the heavy side. Coming in at 38 oz each, I noticed the significant weight difference vs the Solomon Quest Boots I’d been using. Now, I completely understand that these are a TOTALLY different style boot, so it’s really hard to knock them for their weight because if you are ordering these boots, you know you are getting a heavy-duty boot, not a light-weight, flexible one.

Still though, the Explorer Boots were a few ounces heavier than others in their class like the Kenetrek Mountain Extreme Boots (another boot I’d been using for over 6 years) or the Lowa Hunter EVO Boot. The Hoffman Boots offer a better price point without sacrificing quality. In fact, they use an extra thick 2.8mm-3mm leather to ensure long-term durability. Yes, it makes them a touch heavier, but also provides more durability.

Hoffman Boots After a Full Season’s Use

After a full season’s use, the Hoffman Explorer Boots still looked, felt, and functioned great. As you can see above, I need to give them a good cleaning and treatment, but they held up excellently after using them hard from summer scouting to late season hunting.

Each and every year I like to take a wet, soapy brush to my boots and clean off the dirt, then put a treatment of boot dressing on them. In some cases I’ll do a treatment mid-season if I’ve really gotten into some wet or nasty weather in order to keep the leather from drying out, but most of the time a treatment at the end of the season works well.

It was a real treat to test out these Hoffman Boots all summer and fall. Many miles were put on them in some very rough country. I packed out some animals with them (one load weighed over 115 lbs) and these boots kept me dry, comfortable, and on the trail. They are top quality boots made from some of the best materials out there.

Subscribe to Backwoods Pursuit to get Your FREE Backcountry Gear Worksheet!!!

Dial in your gear list, calculate your pack weight, and lighten up your pack with this handy tool!

As a passionate backcountry western big game hunter, I love every moment I get to spend in the outdoors.  Growing up spending each fall in the Idaho backcountry, I developed a particular passion for archery elk hunting.

We use cookies on our website to give you the most relevant experience by remembering your preferences and repeat visits. By clicking “Got it” button, you consent to the use of ALL the cookies. For more information see our Cookie Policy
Do not sell my personal information.
Cookie settingsGot it
Manage consent

This website uses cookies to improve your experience while you navigate through the website. Out of these, the cookies that are categorized as necessary are stored on your browser as they are essential for the working of basic functionalities of the website. We also use third-party cookies that help us analyze and understand how you use this website. These cookies will be stored in your browser only with your consent. You also have the option to opt-out of these cookies. But opting out of some of these cookies may affect your browsing experience.
Necessary Always Enabled
Necessary cookies are absolutely essential for the website to function properly. This category only includes cookies that ensures basic functionalities and security features of the website. These cookies do not store any personal information.
Non-necessary
Any cookies that may not be particularly necessary for the website to function and is used specifically to collect user personal data via analytics, ads, other embedded contents are termed as non-necessary cookies. It is mandatory to procure user consent prior to running these cookies on your website.
SAVE & ACCEPT

Get Our FREE Gear Worksheet